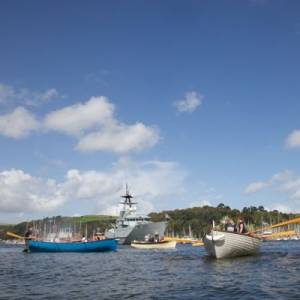 Dartmouth owes the Royal classification of its historic Regatta to none other than Queen Victoria.

Rowing and sailing races on the river have been going on for longer than anyone can remember, but the first recorded Regatta in Dartmouth was in 1822. It was quite a party, though small compared to today’s extravaganza. Documents show three sailing races, one six-oared gig race, and that a military band played at Dartmouth Castle. In the evening 120 revellers attended a ball.

The Regatta was initially run by the wealthier gentlemen of the neighbourhood – a series of jolly japes for the well healed. But, in 1834, the Regatta changed its format when the inhabitants of the town called a meeting and elected a committee of their own.

It was in 1856 that this Regatta, now the second largest in the UK after Cowes, became a royal event – and as usual we can blame the weather. Queen Victoria, Prince Albert and the Prince of Wales were sailing along the Channel in a flotilla of nine boats, when bad weather drove them into Dartmouth to seek shelter. This unscheduled stop came the day before the 1856 Regatta, on August 11th. Queen Victoria donated £25 and Prince Albert gave £20 for three rowing races, to be competed for by the sailors of Dartmouth, and the races took place on the second day of the Regatta.

The following day, Queen Victoria and her entourage set sail for Plymouth, but before she left she bestowed the title of Royal on the Regatta. Every year since that day, the Regatta committee has written to the Monarch asking for Royal Patronage. The current Patron is HRH Prince Andrew, the Duke of York.

There is plenty to see and do throughout the 2011 Regatta with rowing taking place everyday on the river as well as sailing organised by the Royal Dart Yacht Club. Sadly the air displays are over-shadowed by the loss of Red 4 Red Arrows pilot John Egging which has resulted in the grounding of the Hawk T1 aircraft and therefore the cancellation of their appearance at Dartmouth. It is understood that other air displays will continue with the Lynx helicopter display on Thursday 25th at 6.00pm and the Battle of Britain Memorial Flight at 5.30pm On Friday 26th. Fireworks displays are at 9.00pm on Thursday and Saturday nights.

The guardship this year is HMS Severn. The ninth and current HMS Severn is a River class offshore patrol vessel of the British Royal Navy. Named after the River Severn, the ship is the first to bear the name in 56-years.

She was built by Vosper Thornycroft in Southampton to serve as fishery protection units within the United Kingdom's waters along with her two sister ships Mersey and Tyne. All three were commissioned into service in 2003 to replace the five older Island class patrol vessels.

Parking during Regatta is always at a premium and visitors are advised to use the well organised Park & Ride facility. For those arriving by sea, call up Dart Harbour on 01803 832337 or VHF Channel 11 (call sign Dartnav) on arrival. A well organised Water Taxi service is operated by DHNA and they can be contacted on VHF Channel 69

Boatshed Dartmouth are operating every day throughout Regatta. However, appointments to view should be made well in advance as it is an extremely busy time. Up to date Regatta news is available on the Regatta website

Thinking of Selling Your Boat?
Boatshed Dartmouth can help you prepare your boat for sale and can have it on the market within days available to Boatshed’s own database of over 400,000 registered users. And now the photographs are 4 times the size and as always we sell boats on a ‘No Sale, No Fee’ basis. 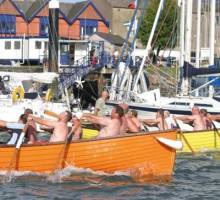 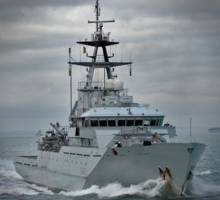