Boatshed Dartmouth
Jubilation all round as hundreds get on the water
Sunday, 10 June 2012

Jubilation all round as hundreds get on the water 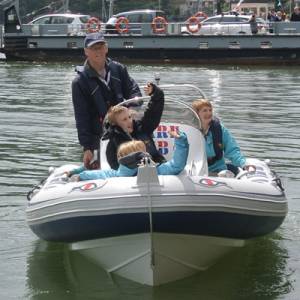 Over 340 people made the most of the British Marine Federation South West’s “On the Water” ‘Try A Boat Free!’ event which took place in Dartmouth over the Diamond Jubilee weekend. With the holiday celebrations adding to the feel of jubilation, even the weather co-operated, helping to make the two-day event a huge success. In the six hours available each day, the organisers reported up to up to 28 people an hour were getting out on the water, choosing to try lots of different boats from RIBS to sailing yachts, powerboats to classic craft.

One of the highlights of the event was the spectacular Stirling 34 race boat from the BananaShark Company. With a competition running to win a ride in the boat, and daily draws on the quayside for a place on board, visitors to Dartmouth flocked to see this high speed race boat in action. BananaShark will be setting off of an a Round Britain trip in a few weeks time.

Visitor reaction to the free Try a Boat day was overwhelming, with many people saying it was a “highlight of their weekend” and “the best day ever”, and the smiles of those coming ashore said a lot more! With over 11 boats available all over the weekend, some of the most popluar included the fast RIBs (Rigid Inflatable Boats) from Ribeye and South Devon College. The marine businesses involved in supporting the event also reported high levels of satisfaction. Garry Elliott from Frogmore Boatyard said; “It was an excellent event, which gave us a great opportunity to get to meet and talk to potential new customers. Boating is incredibly popular, and events like On the Water, give people a fantastic hands-on chance to have a go and chat to all sorts of different boat suppliers and manufacturers to really determine which type and size of boat is best for them.”

Staff and students from South Devon College were key to the event’s success, helping in advance with event publicity and being heavily involved in the organisation and smooth running of the event over the weekend. Adrian Bevin, Programme Coordinator at South Devon College’s Noss Marine Academy said, “We were delighted with the event, which worked on many levels for us. Not only did we get a lot of interest from people in our on the water courses, as well as boat building and
marine engineering, but it was also an excellent opportunity for us to network within the marine industry.”

Secretary of BMF South West, Paul Singer agreed saying, “The students and apprentices from South Devon College presented themselves in a professional manner throughout and helped it all run incredibly well. They are a credit to both the college and the marine industry.”

With the BMF SW accounting for over 30% of the UK’s £2.9 billion marine industry turnover, this event provides marine businesses in the area with valuable new customer contacts. The south west is the largest employer in the UK marine sector, providing nearly 10,000 jobs across the south west region. 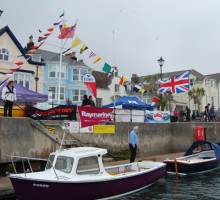